Durga ~ Rooted in the Authority of Love 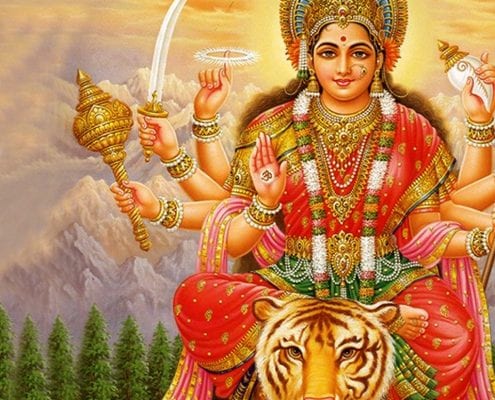 The story of how Durga came into form happened a long, long time ago. It was a time of a great war between the Gods and the demons; one that had been going on for millions and millions of years.

At this point in the war, the demons were really close to winning and taking over the world. The Gods were at a loss—they had already been thrown out of the heavens and down to the Earth, and they were wandering around completely lost.

The Gods gathered together and asked each other, “What are we going to do? We’ve got to do something!” One of them shouted out, “What about the feminine—where’s the feminine?” They all looked around and saw that they were all masculine embodiments of the Divine. And they said, “Ahh, you’re right, we need the feminine. Of course!”

They all ran to Maha Devi, the great Goddess, and said, “Maha Devi, please take form, we need you.” And from their asking, a glorious Goddess took form: Durga.

Durga came riding in on a tiger. She had this big, hot, furry animal in between her legs. Her heart was so radiant—radiating a love that had never been seen before; such a fierce, motherly love. Her solar plexus—her power center—was radiating like a thousand suns in all directions. Her belly was relaxed. Her sexual center was open, soft and receptive.

Durga’s body was filled with presence, the presence of her truth and love. She was here. Fully here. And in that presence, there was an authority. No one would even think of coming in too close to her if they were not invited in. In this way, Durga had very clear boundaries, but in a very different way than we usually conceptualize when we try to fight for our boundaries. Durga’s protection was her presence. And in presence, nothing sticks.

Durga came riding in with such a fierce love, such an incredible commitment, like roots growing into all directions. Her roots were firmly planted in her love. All the traps, habits and games of the demons were so incredibly irritating to her because she only saw them as distractions to her love.

Durga entered the war and began to slay demons. She did it with such a grace and relaxation; there was no reactivity in her. Durga was so in love with truth that she was not willing to compromise an inch. Whatever would come in the way of her love, she would slay away—she had a dagger in one of her hands. If she was to negotiate with the demons—try to understand or analyze them—she would get distracted. She would cut herself off from the source of her power.

Durga simply slayed the demons away, and then relaxed back into her truth, which navigated her into the next step. Her focus, her whole intention was planted in her love, in that which she loves. She would connect with that which truly matters to her before she moved. And in that integrity, there was nothing to hide.

She was transparent enough for the power of the whole universe to flow through her. Her trust in that was unwavering. It was from these deep roots in love that she defeated the demons and restored the world back to balance.

~ Excerpt from Chameli’s teachings on the Goddess Durga. To dive deeper into Durga’s teachings and mythology, we recommend our Durga Self-Study Online Sadhana.