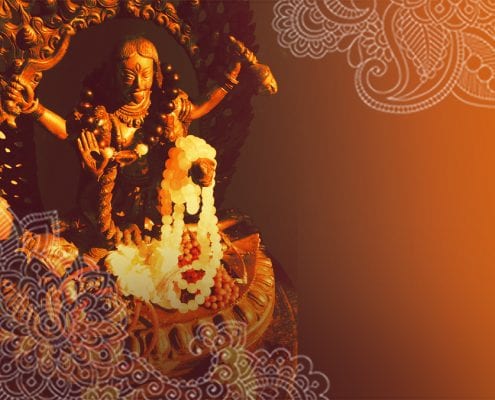 The story of Kali Ma is a myth about how the goddess came and saved the world in a time where the world was in a very similar state to the predicament that we find ourselves in today: one of destruction and darkness.

This story begins in the middle of another story, the myth of Durga. The demons and gods were at war with each other, and it seemed the demons were about to win and take over the world. Desperate for help, the gods called in the Goddess Durga, riding in on a tiger, uncompromising in her commitment to truth and love.

At one point in the battle, as Durga was battling the demon, he multiplied himself into an even fiercer form. Whenever someone would stab or wound him, out of each drop of blood, a new demon would be created. From each drop of blood there grew more and more demons. The battle worsened and it seemed the demons were getting stronger and stronger each time Durga attacked them.

When Durga saw the havoc that this demon was creating, she realized that an even fiercer expression of the feminine was needed. There was just no space for nice; there was no space anymore for acceptable, digestible or graceful. A power of the feminine was needed that was so strong and unfiltered, one beyond cognition, one that structures of society had forever feared and created elaborate structures to try to control and suppress.

Durga called upon this fiercest dark feminine, and out of her forehead came Kali Ma.

Kali Ma was naked, ferocious and bloodthirsty. She was the embodiment of raw, unmasked rage. Her skin dark blue, her tongue sticking out, her hair wild and untamed; she wore a skirt of chopped off arms and a necklace of chopped off heads. Kali Ma was the force that could destroy illusion and illusion both. Her rage was the expression of her fierce love of truth.

She was so tired of all the games the demons played, and had no time to be polite or pretty. She didn’t care if people liked her. She just was, without any care for how she was received.

With all her being, Kali screamed to the demons, “Enough! I am here because I love you…and I’m not going to watch you destroy yourself, destroy the world. I am here because I know who you are. And even you—the most disgusting, tricky demon—when I feel into what you are made of, I cannot but love you. I cannot NOT love you. And that’s why I am going to eat you; I am going to eat all of these perverted, violent ego structures that keep you trapped. You are not going to like it. You’re going to resist me… judge me. It doesn’t matter, because I love you and I won’t let you get away with your petty games.”

Kali began devouring the demons and lapping up with her tongue all the drops of the blood from the demons before they fell to the ground to take root and sprout more demons.

The oceans were churning; the thunders were rolling over the sky; the mountains were rumbling. Finally, Kali defeated the demon, and it seemed that Kali had saved the world with her destruction.

But after her victory, Kali was on a roll. She began dancing wildly on top of the demon; there was blood spewing everywhere. She danced and howled in a frenzy, intoxicated on blood and murder. She soon began to lose control.

Drunk on her own rage, Kali began roaming around in the world, destroying everything in sight. She was unstoppable. The gods, though happy the demons were defeated, had no idea of what to do—they were terribly frightened by Kali. They gathered together urgently, exclaiming, “We have to stop her! She’s about to destroy the whole world!” They decided to send Shiva to try to stop her.

Shiva was Kali’s consort, the God of Destruction. He was considered the epitome of awareness and presence, the formlessness from which Shakti takes form.

This is when Shiva laid himself down on the ground with his vulnerable belly and chest exposed. He laid himself in her path. Right when Kali was about to step on him, she looked down and met his eyes. Shiva met Kali’s gaze and loved her unconditionally, in her darkest moment…and suddenly, Kali woke up from her trance. She came back into consciousness, suddenly aware of herself again.

~ Excerpt from Chameli’s teachings on the Goddess Kali. To dive deeper into Kali’s teachings and mythology, we recommend our Kali Self Study Online Sadhana.