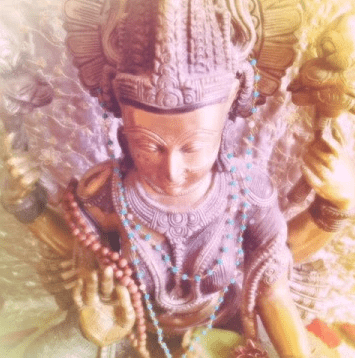 The gods and the demons were having a competition, chasing after the elixir of life called ‘Amrita’. They were seeking it in all the universes and had been looking everywhere for Amrita, yet they could not find it.

Suddenly, the ocean changed into a dark toxic blue, and the water turned into poison. This brought a great danger, as the whole world was about to be poisoned.

In panic, the gods and demons turned to each other, unsure of what to do. Shiva, one of the gods, volunteered to drink all of the poison. As he drank it in, his throat became completely blue. This went on for a long time—Shiva continued to drink in the poison of the ocean as it frothed and moved wildly.

After some time, the ocean became completely still. Everything fell completely silent and calm after the storm.

Out of the stillness in the ocean arose a Goddess named Lakshmi. She was the most beautiful Goddess the world had ever seen. Radiating feminine warmth and love, she was so full of abundance and exquisite beauty. Underneath her arm, she held an urn, and out of this vessel poured forth Amrita, the elixir of life.

Lakshmi was extremely voluptuous, adorned in red, white and golden clothes. She had four arms, and each arm symbolized a different aspect of the manifestation of spirit. Her four arms were Dharma (right living, the unique purpose and nature of each life), Aartha (genuine wealth), Kama (sensuality, desire, and love) and Moksha (ultimate liberation and freedom).

Lakshmi emerged from the ocean and all of the gods fell in love with her and wanted to marry her. They couldn’t take their eyes off her. One by one, they started to court her and use all their fancy superpowers to seduce her.

Indra, the king of the universe, had the most powers of them all and turned to Lakshmi first. “Come with me and be my wife,” he beckoned her. “You will have all the power in the universe if you come with me.”

Then Shiva began to approach her. He was the monk from the mountains who had meditated for thousands of years. He had dreadlocks and hadn’t showered in all that time, but still, he walked up to Lakshmi, showing off his superpowers of enlightenment and presence.

“Hey Baby,” he said to her, “Don’t you want to be with me? I can give you that sexy presence that all the spiritual girls long for.”

But Lakshmi was wise, and was not enticed. “No,” she replied, “I’m not going with you.”

Next came Kama, the god of love and desire. Riding on a parrot, he was oozing perfume and surrounded by naked ladies dancing all around him. He carried his bow and arrow, with flowering arrows just like Eros that had the power to cast a spell of love. So he was absolutely confident that Lakshmi would choose him. Approaching Lakshmi, he said, “I’m going to give you all of the pleasure in the world; don’t you want to be with me? I’m the perfect tantric lover. I’m going to make love to you all night long for the next fifty million years and give you multiple orgasms.”

Still, Lakshmi refused. In the end, the one Lakshmi chose to marry was Vishnu.

Vishnu was the maintainer of the Universe. He had a staying power; he was not the one who initiates nor the one who destroys. He was the one that kept life going in a steady, day-to-day way. He was the embodiment of commitment. Lakshmi knew she needed Vishnu in order to fully bloom in her abundance, in her incredible feminine fluidity. Lakshmi needed the riverbanks of Vishnu, of commitment, staying power and solidity to thrive.

~ Excerpt from Chameli’s teachings on the Goddess Lakshmi. To dive deeper into Lakshmi’s teachings and mythology, we recommend our Lakshmi Self Study Sadhana.